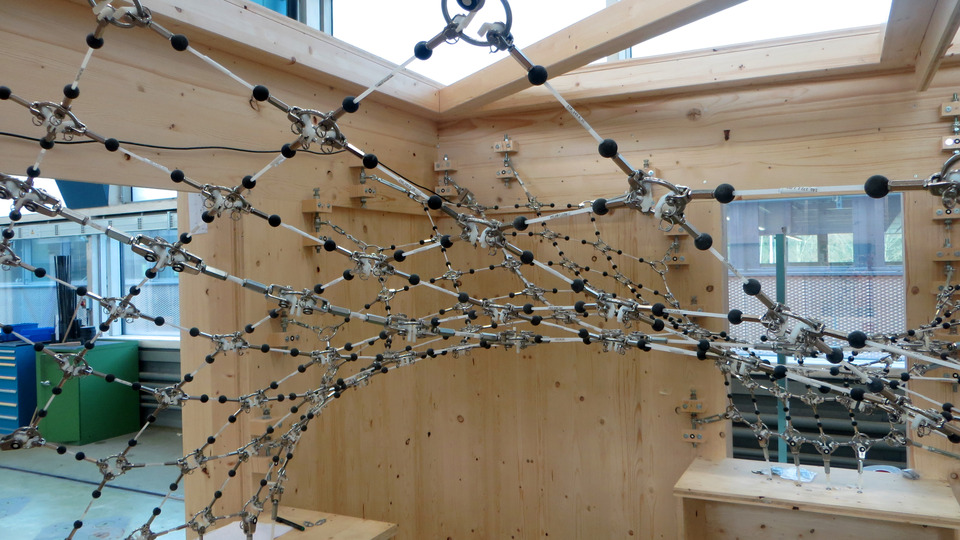 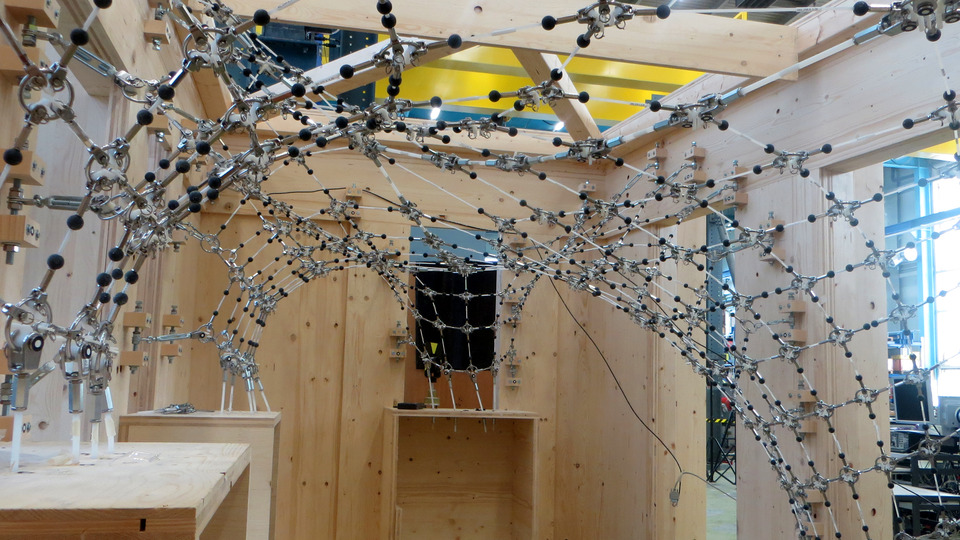 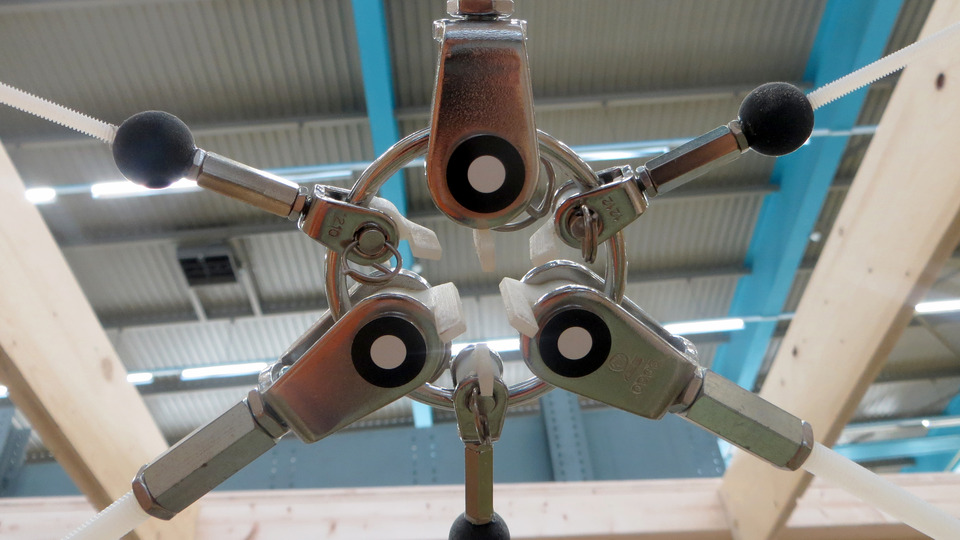 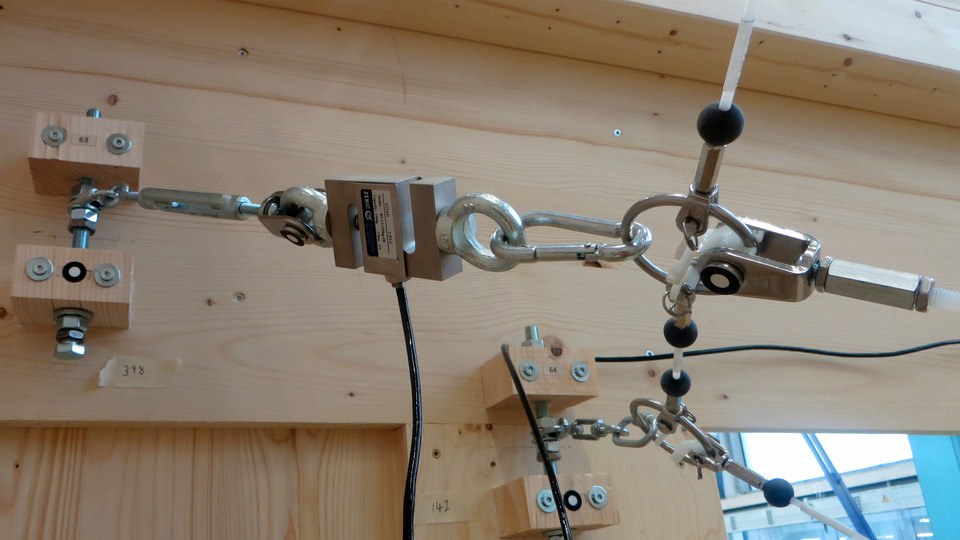 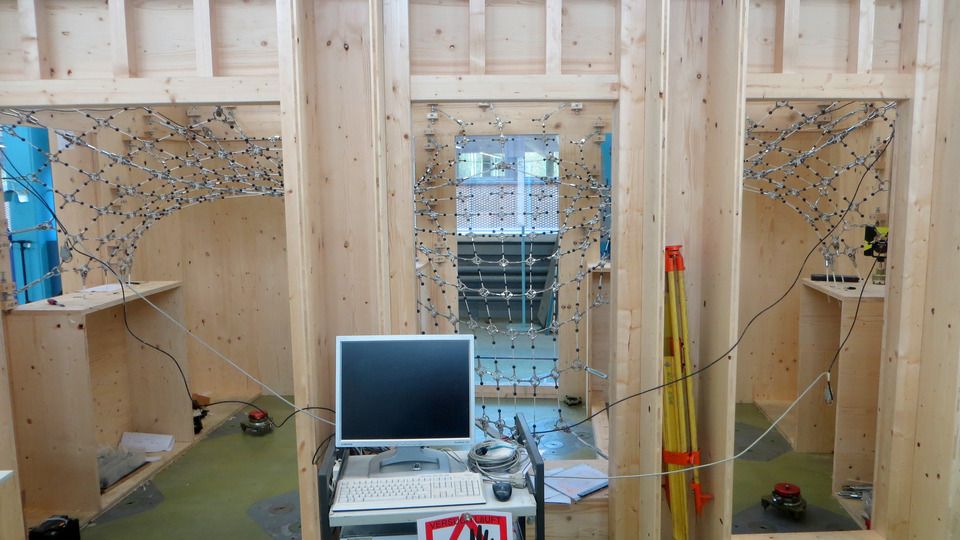 As part of the NEST platform, the roof of HiLo in Dübendorf is planned to be constructed in 2019 featuring a full construction-scale net and fabric-formed, thin shell concrete structure. This shell roof structure is approximately 17 m by 9 m in plan, 6.5 m tall at its highest point and will consist of a double-layer, concrete sandwich cross-section. Extending from the prototype cable-net formwork systems developed by the Block Research Group in 2013 and 2014, a new 1:4 scale prototype rod-net system has been under investigation since 2015, as part of formalising the control protocol for the formwork system, as well as investigating the use of a novel rod-ring network.

The rod-net consists of steel-ring nodes connecting plastic-metal rods used to form a net structure that is fastened to a timber housing with tightening turnbuckles at each boundary point. The net geometry may then be adjusted by tightening selected turnbuckles and recording the resulting displacement field via spherical and circular markers, as well as through force changes in load cells positioned at the net’s four corner points.

The net’s control system, which determines the necessary adjustments at the boundary that are needed to converge to a target geometry, is being developed in collaboration with the Automatic Control Laboratory at ETH Zurich. The control process is coupled with 3D point-cloud measurements of the markers, using expertise and specialist equipment from the Institute of Geodesy and Photogrammetry at ETH Zurich. The measurement of the 3D point-cloud is realised at the sub-millimeter level by the deployment and combination of several QDaedalus systems, developed at the Institute of Geodesy and Photogrammetry. The QDaedalus system is based on a motorised image-assisted theodolite and specialised software, allowing highly precise spatial measurements of spherical or circular targets. The 3D coordinates are obtained by a geodetic network adjustment, based on the spatial directions carried out at different locations.

This multi-disciplinary, collaborative project will inform a 1:1 scale prototype of the NEST roof and provide valuable data, methods and workflow validation for the eventual final construction. The research is supported by the National Centre of Competence in Research (NCCR) Digital Fabrication.

There are no keywords.