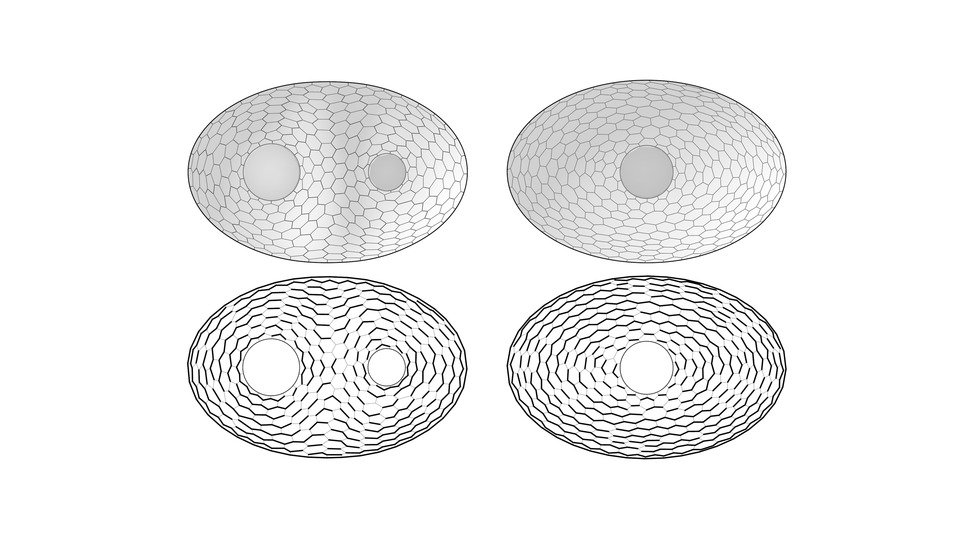 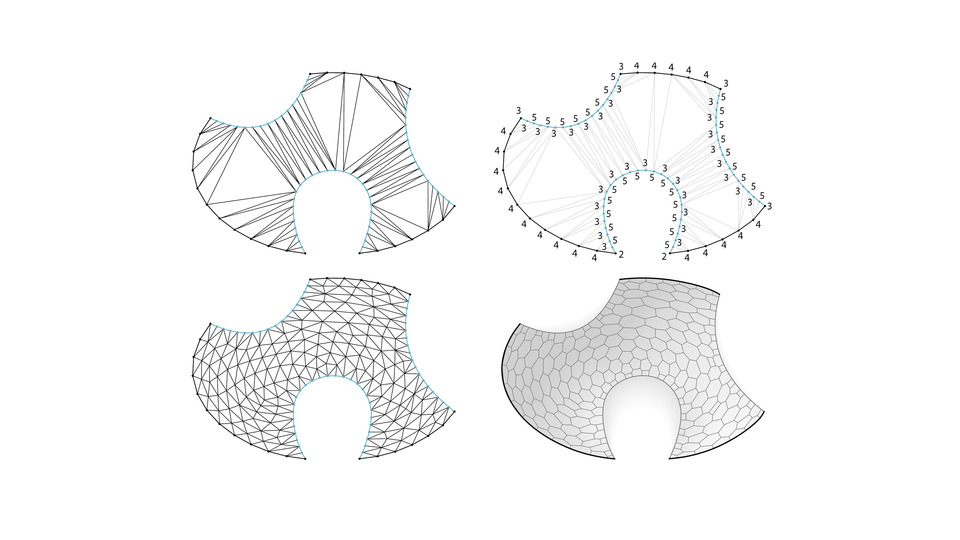 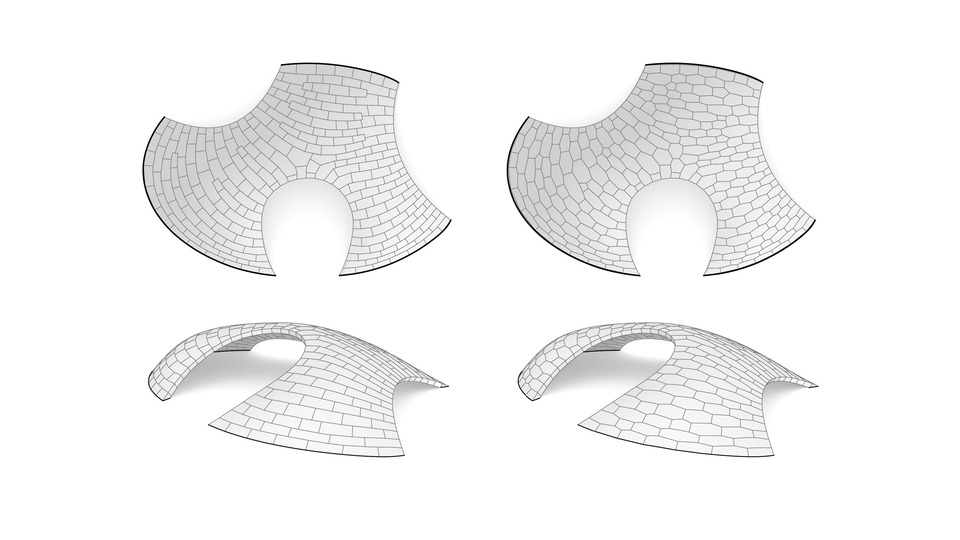 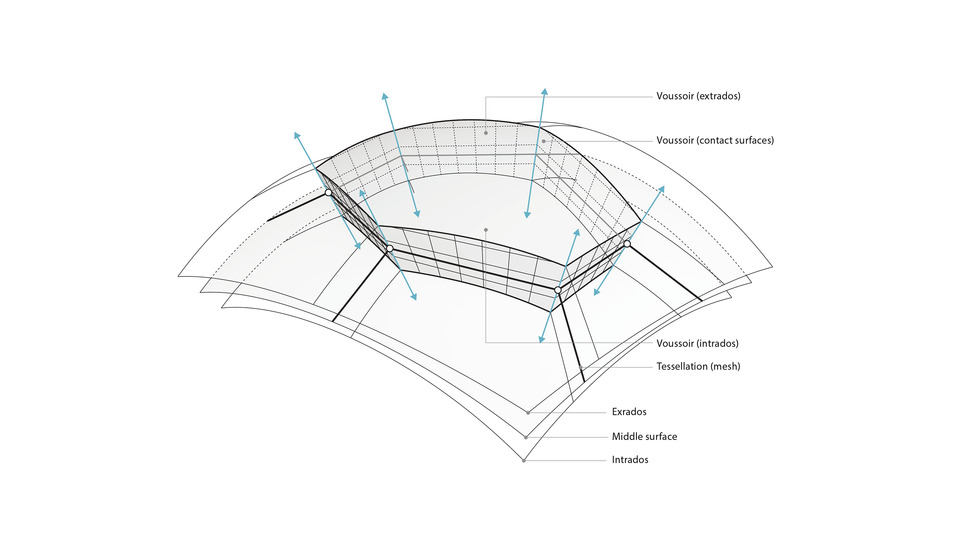 The formwork for a concrete structure accounts for 35-60% of the building cost. This is especially an issue for complex, bespoke formwork geometries, which typically cannot be reused and usually demand doubly curved shuttering and dense scaffolding to support the curing concrete. Developing an efficient formwork at low cost for bespoke shapes while taking advantage of emerging digital fabrication and prefabrication techniques poses challenging research questions.

From the beginning of concrete shell construction in the 1920s, a variety of techniques have been developed to reduce the need for formwork, falsework and scaffolding. For example, this includes efficient formwork constructed from straight elements for specific mathematical shell shapes, inflatable formwork for dome structures and shells built from prefabricated modular elements, eliminating the need for continuous shuttering. One of the most remarkable innovations in the heydays of shell architecture in the 1960s was an overhang and cantilever method for prefabricated shell modules, which did not require intense scaffolding to support the individual elements during the erection process. Such prefabricated shells were built up by starting from the outer supports towards the centre, providing structurally stable rows or sections during construction. Actually, during erection, these structures can be seen as shells with a very large opening in the centre. Thus, this concept depends on a balanced structural form and defined construction sequences in stable patches, since the weak connections during assembly are not capable of withstanding significant bending and tension forces.  It is precisely for this reason that the system has been used for funicular (i.e. compression-only) shapes. To stiffen the structures  and guarantee their stability for load cases other than the design loads, the joints were usually filled with cast-in-place concrete after installation. Besides saving material and labour because of the absence of scaffolding, a great advantage of these techniques is, first, the short installation period (e.g. 20 working days for a 4500m2 dome), and, second, the unobstructed space underneath the structure during construction. With the casting technology available in the 1960s, an economical use of precast elements was highly dependent on the total number of elements produced with a single mould. Therefore, it is obvious why this method has never been applied for more complex or bespoke geometries. However, structural shells from prefabricated modules with bespoke geometries are of course known from historic stone masonry vaulted construction. The understanding of complex stereotomic techniques, used to describe and produce individual stone voussoirs, is even today a very important source for the development of self-supporting modular systems and thus specifically valuable for this research.

This research aims to develop new design, optimisation, and analysis strategies for permanent, geometrically complex formworks made out of self-supporting, stereotomic discrete parts. Such developments are inseparably linked with research on corresponding material, fabrication and construction systems, which will be conducted in parallel.

The design and analysis of self-supporting formwork systems will focus on the adaptation of existing methods, such as the Thrust Network Analysis method. Additionally, combinatorial optimisation techniques will be used. The material and fabrication research for such systems will focus on the latest technologies for creating highly bespoke volumetric elements. For funicular, i.e. compression-only, forms, materials can be used with very limited bending capacity. In this context, 3D printing provides interesting possibilities, allowing the manufacturing of geometrically complex but structurally very limited parts from materials such as concrete or sand.

Next steps include further research on a broad range of possible applications for various building components. Previously developed form-finding methods will be tested for the shape generation and analysis of first digital studies. Such models will be evaluated and analysed using 3D-printed scale models.

Further developments of the principles might include the on-site automated/robotic assembly of individual modules in a fully integrated construction framework. The interdisciplinary exchange within the NCCR "Digital Fabrication" will help to evaluate and direct possible future investigations in this direction.